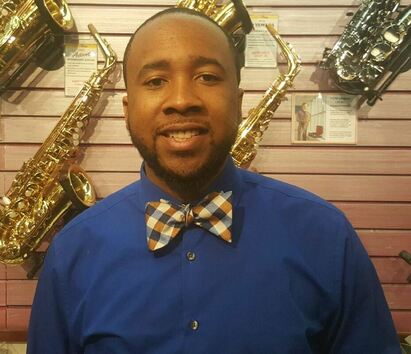 Mr. White currently serves as the Director of Bands at Cordova High School. Mr. White, son of Roderick N. White Sr. and Tracey White, was born in Tacoma, Washington as an “Army Brat.” He traveled around the country and around the world, in which he lived in Germany for a total of four years. His father was then stationed to Clarksville, TN., in which his family settled. Mr. White attended Northeast High School in which he achieved numerous recognitions. He was selected to participate in the All-County Honor Band, he received superior ratings from solo and ensemble, and he also won many 1st place Drum Major awards from numerous marching competitions in the Middle Tennessee area. Mr. White graduated high school with honors, in the Class of 2007.
After receiving academic and music scholarships, Mr. White then moved to Memphis, TN., to continue to receive a higher education in the field of music. While attending the University of Memphis he received many awards and honorable recognitions. He played with the Southern Comfort Jazz Orchestra (SOCO), The University of Memphis top performing wind band, The Wind Ensemble, he has played in the Memphis Pep Band, and for the years of 2009 and 2010 he served as a Drum Major for “The Mighty Sound of The South,” (MSS) The University of Memphis Marching Band. Other positions and awards attained was, Sophomore Representative for the MSS Band Executive Council, Mr. Mighty Sound of the South for the 2009 band year, Re-Chartering president for the Theta Lambda Chapter of Kappa Kappa Psi National Honorary Band Fraternity Inc., and the 2011 Rudi E. Scheidt School of Music, Music Education Achievement Award. Mr. White graduated from the University of Memphis with a Bachelors of Music with a concentration in education, Cum Laude, in May of 2012. Mr. White graduated with his masters of music education from the University of Mississippi in the summer of 2017 and is now pursuing his Ph.D. in music education from the University of Mississippi.
During his tenure at the “THE” Central High School, Mr. White has help lead the Central High School program to receiving excellent and superior ratings for years under his leadership of the Symphonic Band. Dozens of students have been named to the WTSBOA All-West Tennessee Band as well as the Tennessee All-State Band. The Marching Band has also received many statewide and national recognitions as being ranked fourth in the Nationals High Stepping Competition.
Mr. White is a member of WTSBOA, (NAFME) National Association for Music Education formerly known as the Music Educators National Conference (MENC), and Kappa Kappa Psi National Honorary Band Fraternity Inc. Mr. White is continuing to develop the Cordova High School Band Program by pushing them to reach their full potential.